The helicopter touches down on a cliff’s edge, and we step out onto a makeshift helipad not much bigger than a hot tub. We’re basically eye level with the clouds. And while the landing felt precarious, the destination, we’ve been told, promises to be worth the risk. We’re on the north coast of Western Australia, searching for a lush watering hole called Eagle Falls. Our pilot, a square-jawed Aussie named Alan, has been exploring this remote region of W.A.—called the Kimberley—for two decades, and he puts its isolation in stark relief. “There’s spots we could land today where no white man has probably ever been,” he says. Welcome to the final frontier.

The Kimberley is Australia’s best-kept secret: a wilderness area roughly the size of California but with fewer than 35,000 permanent residents. It’s 8,000 miles of untouched coastline waiting to be explored. There are only a few roads and just two paved airstrips. The only practical way to see the coastline is by boat or air. To put it mildly, this is a place where you can seriously disappear. As Bruce Chatwin wrote in his celebrated travelogue Songlines: “Being lost in Australia gives you a lovely feeling of security.”

With that in mind, I’d flown to the city of Perth, a hub for the oil and gas industry that acts as a gateway to the Kimberley, then hopped on a short flight to Broome, where I boarded True North, a 164-foot-long, 18-cabin boat for a seven-night tour of the W.A. coast. This beast was designed with adventure in mind: Its shallow draft allows it to navigate in and out of coastal waters where other ships can’t go. And it has a helipad for days when you want to explore inland, hiking the jagged terrain or finding a freshwater swimming hole to cool off in.

After a first-night cocktail, 35 passengers and I pass out in our cabins and wake up in Talbot Bay, near Cockatoo Island, part of the Buccaneer Archipelago. I know, those names sound made up. Get used to it. Every landmark and wild animal in Western Australia feels like it was named by Dr. Seuss. 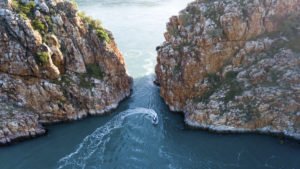 On the first day, I spot a bird called a jabiru and go in search of a rare sea cow known as a dugong. But the big-ticket item is an unlikely natural phenomenon known as the Horizontal Falls. Picture two vertical sandstone peaks—gorgeous red rocks that rise out of the sea with a narrow gap between them. When the tides shift, millions of gallons of water rush between the rocks, creating whirlpools and rapids. It’s like the ocean is a toilet and God just flushed.

To see it, we hop into speedboats and head across glacier-blue seas. When we get to it, the currents are gnarly, and our boat rushes into the breach, retreats, and approaches again. It’s like whitewater rafting by jetting upstream.

“No matter how many times you’ve been in the Horizontal Falls,” says our ship’s captain, Ben Bonnet, “you have to give it the same amount of respect every time.”

That’s what this trip to the Kimberley is about: a battle of Man Versus Nature. Or better yet, a celebration of the Mysterious. Our days aboard the ship are dictated by the tides, which move in and out quickly, changing the sea level by more than 30 feet. One morning, when the tide retreats, the Montgomery Reef rises out of the water like Atlantis (or Atlantis in reverse). It is Mother Nature’s own CGI.

Another day, I go fishing for barramundi, a type of sea bass, with an Aussie guide named Simon. We are floating in the middle of nowhere with nothing to do but wait. And wait. I ask Simon if he is superstitious about the sport—like does he have a lucky lure? Or does he always go back to the same spot? “Yeah,” he cracks, “A superstition? Don’t shag your missus the night before you go out fishing.” Noted.

Four days into the trip, after we’d toured Ruby Falls and the Prince Regent River, an untouched wilderness area with 18 species of freshwater fish and patches of pristine rain forest, I realize I’d barely looked at my phone. There is WiFi on board but no cell reception, and I’ve been so tired at night that I mostly stopped scrolling through Twitter. Eventually, I put my phone in a drawer and leave it there so I can totally decompress. Serenity doesn’t require remoteness, but being out in the middle of damn nowhere sure helps. 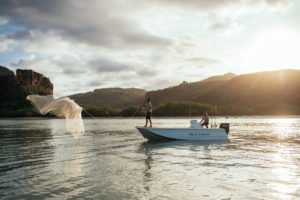 Before the week is up, I reel in a three-foot-long Spanish mackerel, catch a bunch of fingermark bream, and snag a queenfish that the chef slices up for sashimi  n the spot. We drop nets for mud crabs and hike to explore ancient rock art painted by the area’s Wunambal and Gaambera peoples.

The risk with a remote spot like Western Australia, of course, is loving the place to death—that if too many people show up to see the delicate coral reefs and sea life, they might literally ruin it. But that doesn’t seem to be an issue here. The entire week out on the water, we see exactly one other ship.

At times, the adventures are decadent as hell. On one of the last days, we take a helicopter to the mountains inland and find that impossibly perfect swimming hole, where the staff sets up a full bar and I duck my head under a waterfall. The sandstone is a gorgeous black, as if it had been struck by lightning. One of the guides explains that the dark color is lichen reacting against something or other. The truth is, I’ve stopped listening. I just want to get back into the water.

But what I’ll remember most (as corny as it sounds) is the beating of my own heart when three sharks swim by the edge of the boat and a crocodile lurks in the distance. Or when I sleep on the bow of the boat under a blanket of a billion stars.

“There’s no light pollution,” the ship’s captain tells me of the impossibly bright night sky. I ask if he ever gets tired of the light show. He shakes his head. “You never know what you’re going to see.”

The other night, he says, there were so many shooting stars, it was almost like a meteor shower. “It always brings you back down to Earth.”

Boutique cruise ships are just about the only way to explore the Kimberley coast. True North’s trips start at $10,000 per person and offer every amenity imaginable.