This Remote Region in Australia is an Adventure-lover’s Paradise 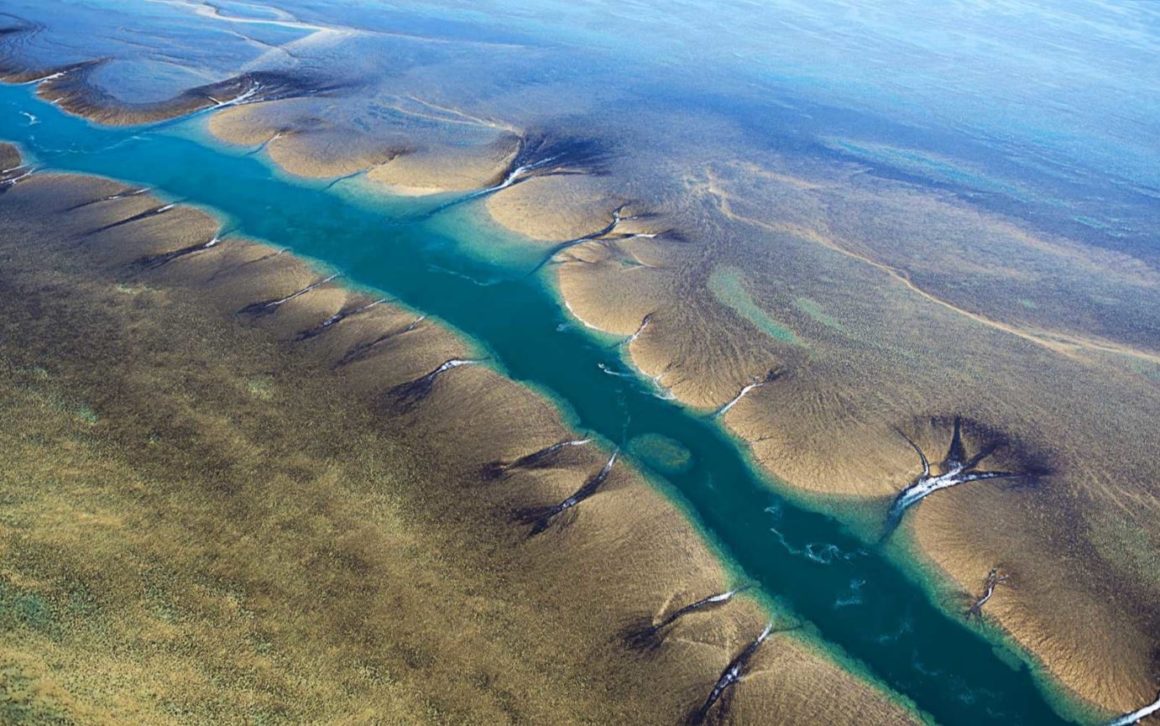 “If I were a croc, I reckon that’d be the watering hole I’d choose to live in,” mused our helicopter pilot, Al. He pointed to a particularly shimmery jade-green billabong beneath us. Looking out over the plain of rust-colored sandstone boulders and scrubby spinifex grasslands, I thought, “Me too.”

I’ve been to Australia a dozen times in the past decade, often for a month at a stretch. Although each trip has been a chance to see a different side of Oz and experience wondrous new places, nothing quite prepared me for the sheer magnitude and majesty of the Kimberley in the country’s remote northwest.

At roughly 162,000 square miles, the region is as large as California, but home to just 40,000 souls. Its 7,500-mile coast is a constantly changing map of islands, beaches and cliffs thanks to enormous tropical tides that top out at about 43 feet.

The Kimberley’s seasonal lakes and mangrove-lined rivers teem with crocodiles of both the saltwater and freshwater varieties, not to mention stingrays and jellyfish (yes, in the rivers). The streams also offer some of the best fishing in Australia. The immense stretches of the Kimberley’s interior are littered with towering, billion-year-old rock formations and solitary boab trees.

Massive waterfalls gush then parch each year with the coming and going of the wet and dry seasons. Only the merest traces of humankind – ancient rock paintings and midden heaps of prehistoric nomadic peoples – can be found sprinkled in hidden corners of this wilderness. In short, this is where even Australians come to see the quote-unquote real Australia.

Last April, I finally got to visit the Kimberley aboard True North, a 164-foot luxury cruise vessel that plies the Kimberley’s coastal waters each year from March to August. True North is able to take guests (36 max) to spots few other ships can reach, thanks to its shallow underwater draft and an Aussie crew, including our captain, Gav, who have been navigating this coast for decades.

Here are 13 places, things and phenomena I saw during my two-week cruise from Wyndham to Broome that I have never experienced anywhere else (and a few I have to get to next time).

You might think your usual vertical waterfalls are stunning, but the most spectacular of the Kimberley’s water features might just be the Horizontal Waterfalls of Talbot Bay. Naturalist David Attenborough proclaimed them, “Australia’s most unusual natural wonder.” Take that, Uluru.

Three coastal gorges are separated by two narrow, cliff-bordered gaps through which the Kimberley’s massive tides flow at a rate estimated to be about 26,000 gallons of water per second. The wall of water created by so much force can reach 16 feet high. Then, for a few minutes four times each day, the two channels go completely still on the surface as the tide shifts direction. The best way to see the Horizontal Waterfalls is either by helicopter or on a motorboat on which you can shoot the rapids and experience the power of nature up close.

Australia’s most iconic waterfalls are in the Kimberley, but only after the wet season of February to March. During the dry season, the region becomes a veritable desert and most of its falls dry up. We visited the 100-meter (328) double cascade at King George Falls the first day of our cruise, and it set the tone.

The only way to get there is by ship up the King George River, and True North was specifically designed in order to be able to pass a particularly shallow sandbar at high tide. Farther south, Mitchell Falls comprises four progressive chutes, each one feeding the next via a network of emerald pools. You could spend days driving there via the Gibb River Road (which is closed for part of the year), but we helicoptered instead, taking in the rivers and savannahs as well as herds of galloping brumbies (wild horses) from above. 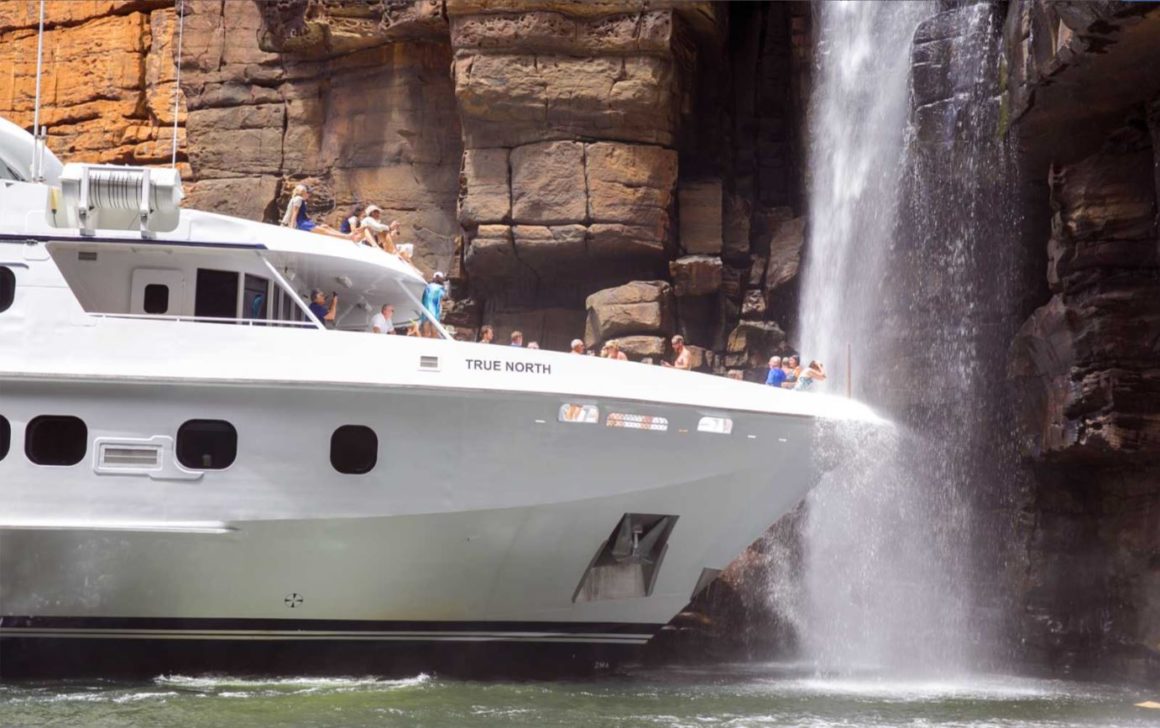 One of the reasons visiting the King George Falls on a ship was so special was because the crew was able to nose it right up under the smaller falls. Passengers at the front of the ship were treated to a refreshing “Kimberley shower.” On another day of the cruise when the ship parks next to the multi-tiered King Cascades, we got to repeat the experience with a gentler dousing. 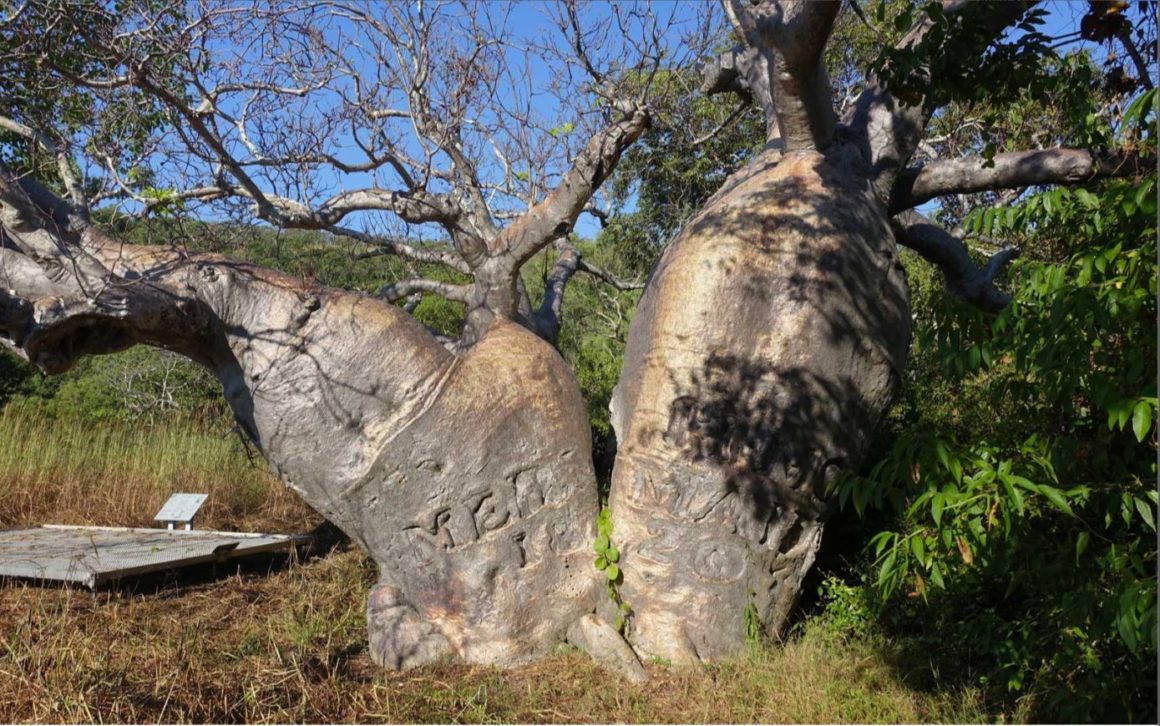 In September 1820, an enterprising young British navy officer named Phillip Parker King was surveying the northwest coast of Australia aboard the HMC Mermaid when he had to beach it at Careening Bay in order to repair its damaged hull. While there, he had the onboard carpenter carve the ship’s name and the date into a massive boab tree to prove they had been there. Now part of Prince Regent National Park, the tree is unmistakable thanks to its distinctive split trunk, which resembles a mermaid’s tail, and the still-legible historical inscription – a literal living piece of history.

Sort of like the Brigadoon of the sea, Montgomery Reef’s entire landmass of 150 square miles appears and disappears twice each day due to the Kimberley’s massive tides. When the reef emerges at low tide, it towers 13 feet above the surface, the water flowing down its coral sides in streams and waterfalls. We spent a morning spotting enormous sea turtles gliding beneath our boat, though the reef is also home to dolphins, sharks, saltwater crocodiles and even the manatee-like dugong. 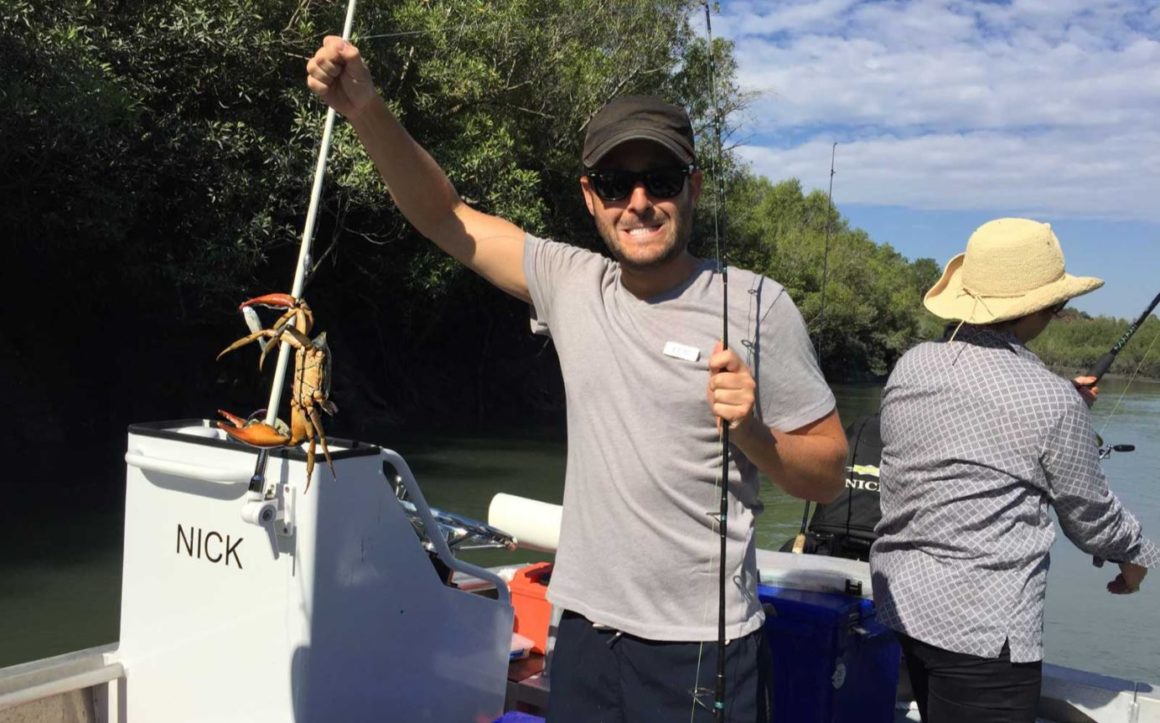 The waters of the Kimberley abound with wildlife from tiny fiddler crabs to colossal crocodiles. Even this inexperienced fisherman managed to catch about a half-dozen different varieties of fish in a single morning on the Prince Regent River. Though the prized barramundi eluded me, I did catch a massive estuary cod, a peppy mangrove jack, and even helped reel in a tawny nurse shark so we could remove the hook from his mouth on another day. My most memorable and unusual catch, however, was a mud crab that latched onto my baitfish and didn’t let go even as he got tangled in my line. You can see him holding onto it and just challenging me to try to get him off.

7. The Oldest Art on Earth 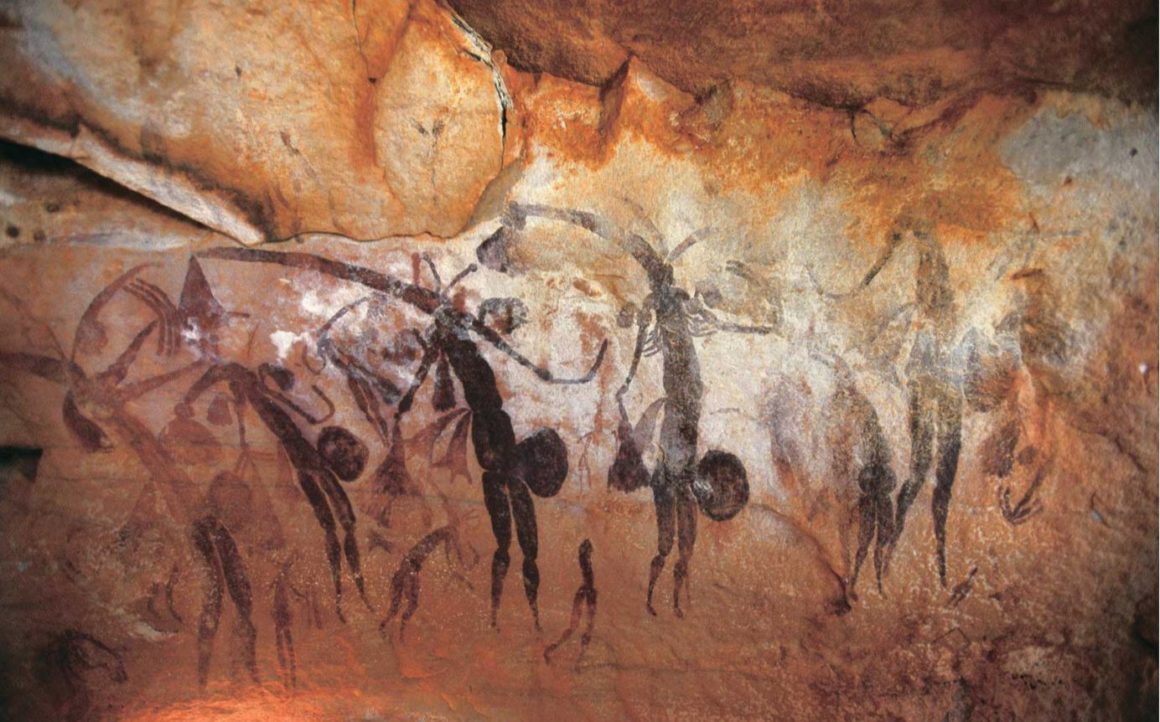 Though barely anyone lives in the Kimberley now, the area was home to nomadic peoples for millennia. Many of the caves where they sheltered display fascinating examples of Gwion Gwion, or Bradshaw, art, which some scientists believe is 50,000 years old. There is also Wandjina rock art, which, you know, only dates back about 5,000 years. Though the stick-like Gwion Gwion figures were truly mesmerizing, it was the colorful Wandjina depictions of animals like wallabies and turtles that I loved best. 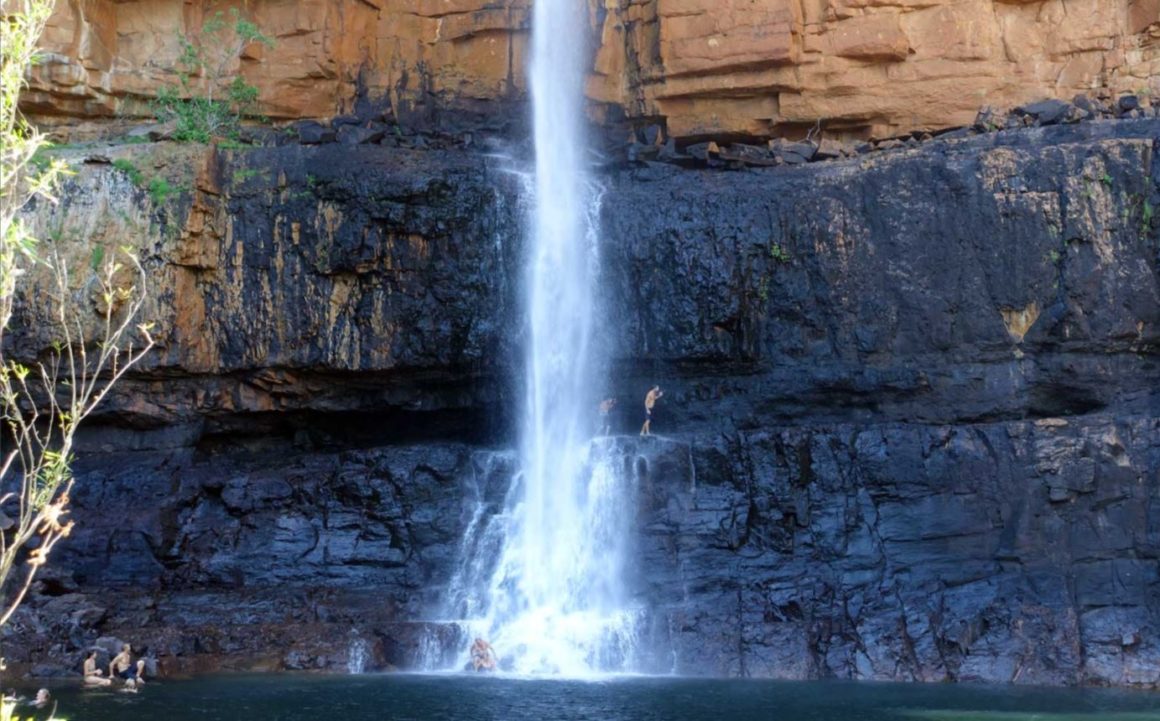 With temperatures in the mid-90s Fahrenheit, the True North crew planned hikes to swimming holes they have found over the years almost every day of our itinerary, each one more secluded than the last. At Monitor Falls, with its single, threadlike cataract, the orange and black striations in the rocks were reminiscent of a Rothko painting. The challenging hike over boulders and through a forest to Jackson Falls was more than worth it to jump from 40-foot ledges into the lapis lazuli waters below and float on my back as butterflies and red-plumed honeyeaters flitted overhead. 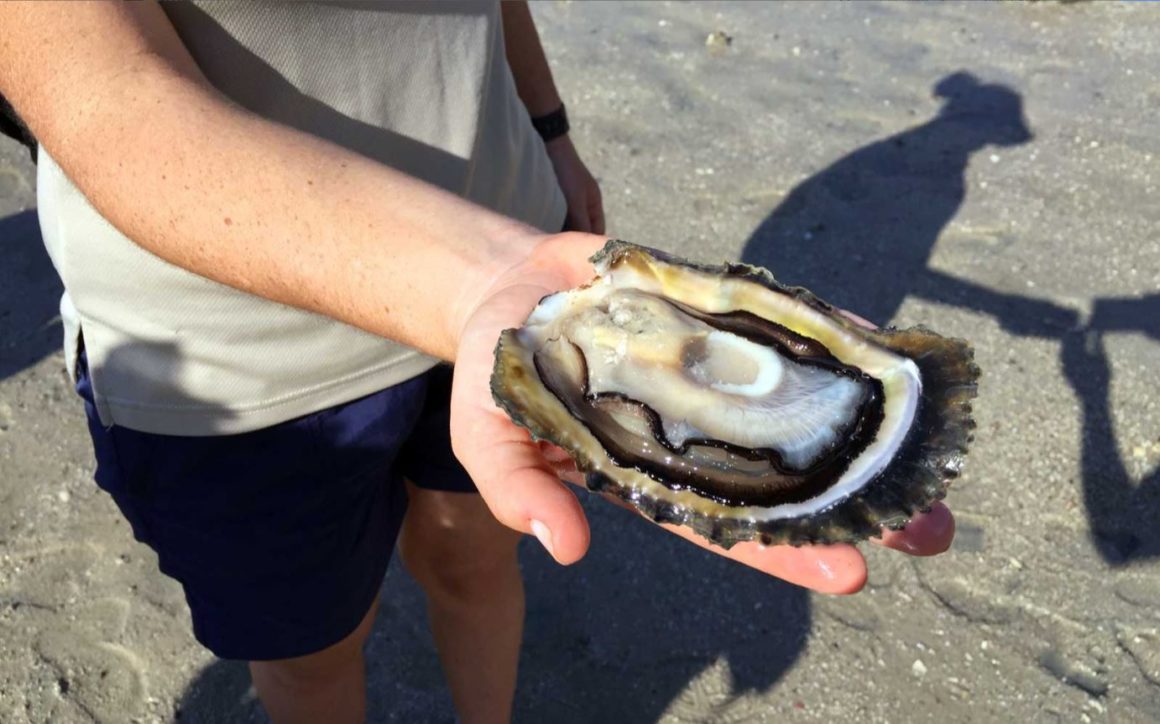 The first rule of oystering in the Kimberley is: Never turn your back on the water. It’s a hard job that involves both chiseling uncooperative mollusks straight off a rock and avoiding a crocodile attack. But prying these prized black-lipped bivalves from the boulders on the shore of Winyalkin Island made sampling the salty delicacies, with a spritz of lemon, that much more gratifying.

10. Petting Sharks and Cruising with Crocs 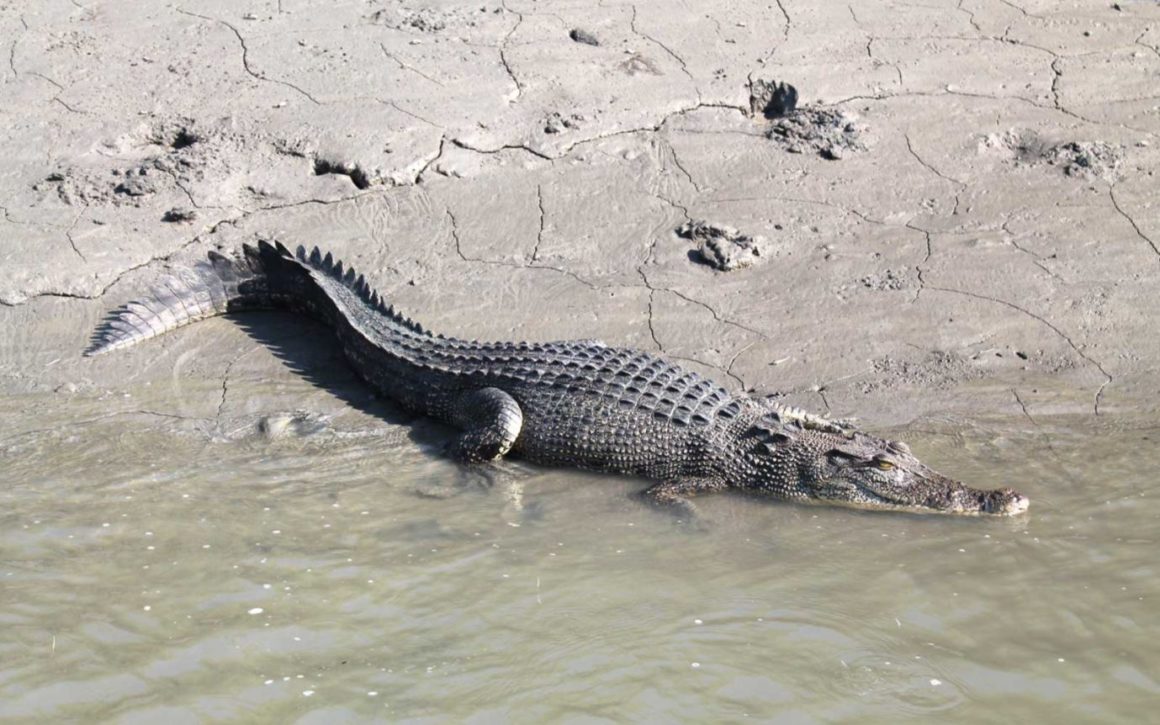 While it fits a certain Australian stereotype that you can’t go in the water without risking a shark or crocodile encounter, in the Kimberley it’s a fact of daily life. No sooner would we pull out in one of the tenders than a pair of beady eyes would pop out of the water as a crocodile surfaced and languidly made its way over from the mangrove-lined banks of a river to investigate us. Luckily, they’re pretty lazy, so we could get close to learn about them. Sometimes too close for me, as you can see by this photo.

I did, however, love how close the gentle tawny nurse sharks would come to the aft of the True North, almost as if they wanted to play, or at least get a pet, which the naturalist on board was happy to provide. 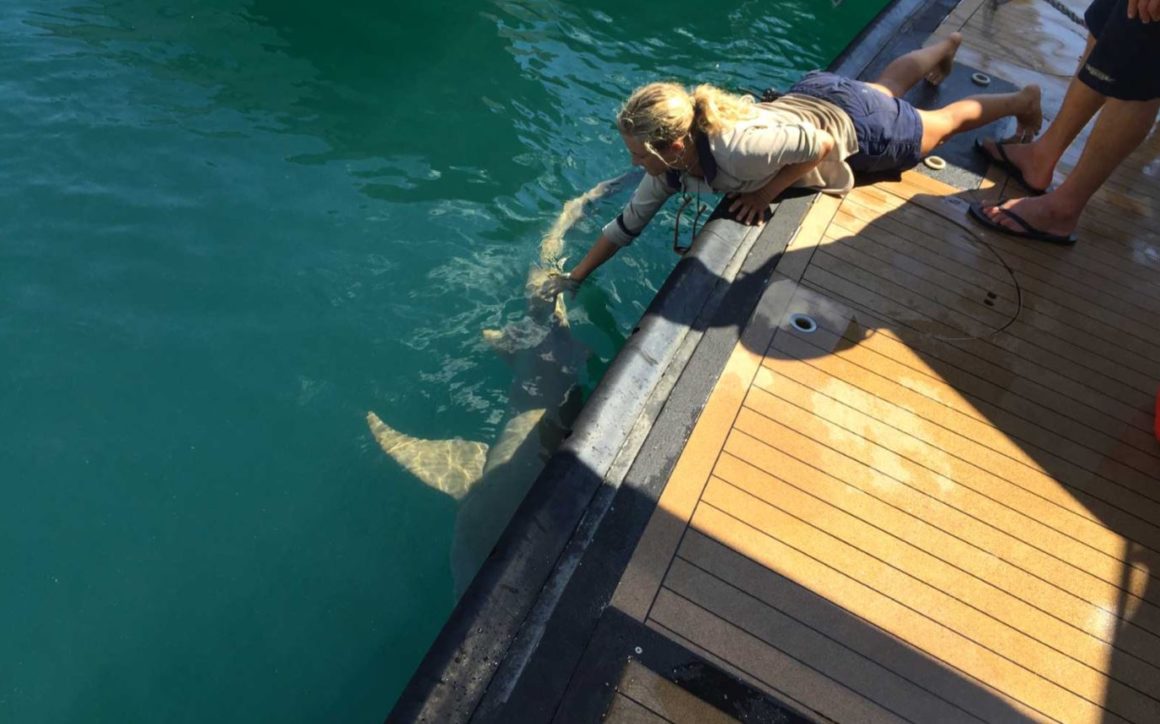 One of the most memorable experiences of the cruise was stopping on the last full day at Silica Beach. The white sand there was so fine that it trapped tiny bubbles of air between the grains, and when you walked on it, the ocean water would instantly bubble up under your feet. It was like enjoying a spa treatment at the beach and gave the whole afternoon a (literally) effervescent quality.

Some folks heli-ski. In the Kimberley, you heli-picnic. It doesn’t quite earn you the same daredevil credentials, but it still feels pretty badass. Especially when the picnic ground is a series of pools feeding a chain of waterfalls, at the bottom of which a freshwater crocodile affectionately called “Lamb Chop” lives. Once the onboard helicopter pilot (Al, again) dropped us off on the lip of Eagle Falls, we were free to take a dip in the nearby pools, wine or beer in hand. Then it was time for a barbecue lunch of fresh-caught fish, steak, chicken and lamb. After a short hike and a last swim in a nearby pool, we packed up for the flight back to the ship. Beats a backyard barbecue any day.

13. Rafting Up and Winding Down 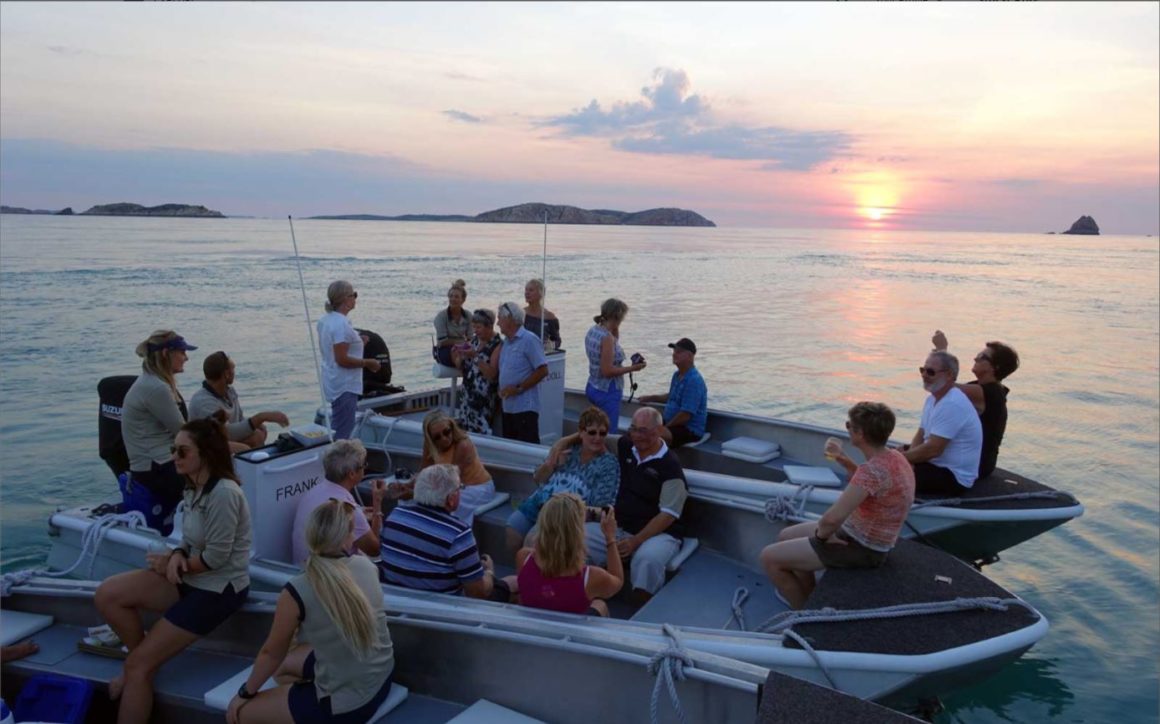 Our last night at sea, the crew gave us a special treat by boarding us onto the small tenders we usually used for wildlife spotting and fishing. They lashed them all together and threw us a cocktail party at sea, riding the outgoing tide. The more nimble among us could hop from boat to boat. The one with the bar was obviously the most popular. We sipped on a Western Australian Sauvignon Blanc-Semillon blend as the sun went down and enjoyed one final evening in each other’s company. It was truly the happiest happy hour I’ve ever spent.

Even with two weeks on the water and covering all that distance, the Kimberley still holds many mysteries. Among those topping my list are the wildlife-rich waters of the Rowley Shoals Marine Park 200 miles off the coast of Broome, the world’s largest dinosaur tracks, and the 400-million-year-old beehive-shaped rock formations of the Bungle Bungles. Maybe next time.