Where Coral is King

In Western Australia, the little-known atolls of the Rowley Shoals have not only somehow escaped coral bleaching, but are thriving in defiance of global trends. Marine biologist Carolyn Beasley takes a Chummy luxury cruise and discovers this secret underwater wonderland with a little help from her friends. 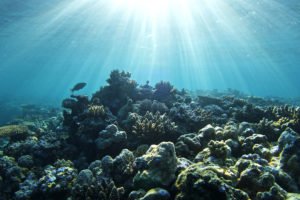 Slowly finning along the edge of the reef drop-off, I see corals in hundreds of varieties covering every plot of real estate, and I’m overwhelmed by the pulsating life. Tabletop corals hide shy fish below, and boulder corals, eight meters across, shelter coral trout big enough to feed my extended family. Tiny baby reef fish dart inside the protective arms of a branching staghorn coral, while bright red fan corals filter the passing currents for tasty plankton morsels. Out in the deeper waters, the reef drops hundreds of meters to the sea floor. Harmless whitetip reef sharks rest in small caves, and mysterious garden eels protrude from sandy areas like fingers, retracting as I approach. Predators like barracuda and tuna loiter, seemingly surprised to see us, while a young manta ray banks around us for an inspection. My eyes almost pop out of my mask when I behold the fastest fish in the sea: the mighty sail fish with its sword-like bill, cruising slowly near the surface 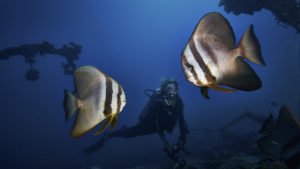 I’m scuba diving at the Rowley Shoals, a series of three atoll reefs, 300 kilometres west of Broome in the north of Western Australia. The reefs are intensely alive at all levels of the food chain, and buzzing with the sheer diversity of life they support. They’re among the healthiest reefs I’ve ever seen and, unlike so many others, show no signs of the dreaded coral bleaching.

The Rowley shoals are 12 hours by boat from Western Australia’s Kimberley coast, remote in anyone’s language, and fewer than 300 people per year are lucky enough to visit. I’ve joined the five-night coral Atoll cruise with the pioneer of luxury expedition sailing in the Kimberley, true north Adventure cruises, to experience this remote wilderness in style—and to find out the reefs’ secret to good health and long life. Following a particularly severe worldwide bleaching event in 2016, the Rowley Shoals were among the only reefs to show no negative impacts. In fact, the area managed to increase its coral cover by one percent, and now supports the most coral cover since records began 22 years earlier. It’s a remarkable, and wondrously beautiful, blip of optimism amid what seems like an ever-more depressing environmental news cycle.

After steaming overnight from the mainland, I wake with a view of Clerke Reef, the middle of the Rowley’s three atolls, a 15-kilometer-long reef encircling a brilliant turquoise lagoon. The True North was built with a shallow 2.2-meter draft in order to access areas that other boats cannot, and on this first morning I see this design element in action. Entry to the calm lagoon is via a 15-meter-wide channel through the reef, and Captain Gavin Graham uses his 15 years’ experience onboard to shimmy the 50-meter boat through the shallow channel without scraping the precious coral. Inside, the True North has 18 stylish staterooms with king or twin beds for a maximum of 36 guests, with 22 staff to cater to their every need. Passengers can recline in the lounge and library, rehydrate at the cocktail bar, or catch some rays on the sundecks. The relaxed atmosphere onboard means staff interact with guests and even join activities as their duties allow. The staff often become friends, and this, I find out, is one reason that more than half of the guests on this trip are repeats. I chat with Sharon and Ed Freriks from Sydney, who are on their sixth True North cruise and keep coming back for the adventurous destinations and capable crew. At dinner, Ed receives the daily fishing award—the coveted “fish hat”—and amid the cheering, Ed claims that he is not usually an angler. “But true north,” he says, “they always get me out fishing and they always look after me.” 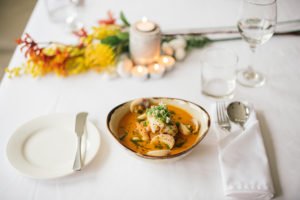 Another reason to return is the fine cuisine prepared by our two chefs, Zaki and Gavin. We devour treats such as lamb on kohlrabi puree with Japanese spices, Moroccan goat cutlets, and, direct from the Indian Ocean to the dining room, freshly caught tuna sashimi. As wonderful as the boat is, the real luxury here is the unlimited access to a rare ocean wilderness. Once moored, the True North becomes a floating hotel, stationary for three nights as the crew deploys six adventure boats. The high-speed dinghies have comfortable seats and are stocked with drinks. Each day we head out snorkelling, diving or fishing.
These activities are world-class, and this is due largely to the reefs’ sound management. Imperieuse and Clerke Reefs fall within Western Australia’s Rowley Shoals marine park, while the third atoll, mermaid reef, is a commonwealth marine reserve. The relevant government agencies maintain a sporadic presence at the atolls, and rules are enforced, including restrictions on fishing. During our visit, fisheries inspectors conduct a routine vessel check for illegally caught fish. Other officials are maintaining Clerke Reef’s mooring systems, and Australia’s border force surveillance plane passes overhead daily, keeping an eye on international arrivals, including illegal fishing boats. 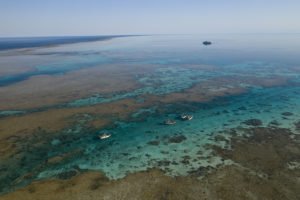 Reefs face many threats, and the ship’s naturalist, Dr. Dave Williamson (‘Dr. Dave’ in the boat’s chummy parlance), explains why climate change is such a big one. Corals are made up of tiny animals called polyps. Polyps feed on plankton and supplement their energy with tiny plants, called zooxanthellae, which also give corals their colour. High water temperatures, though, lead corals to stress and reject their zooxanthellae; they become unhealthy and turn white. The warmer water might be caused because of the el nino and la nina atmospheric interactions, and scientists worldwide observe that with global warming such oceanic conditions are increasing infrequency and severity. “Bleached” corals subjected to warm water for too long die.

But here, bleaching is conspicuous by its absence, and my observation of the healthy reef is backed by science. In April 2019, scientists from the Australian Institute of marine science released a paper on the state of the coral habitats of Western Australia, finding that like mostreefs worldwide, many in this region have been affected by coral bleaching to varying degrees, but the Rowley Shoals reefs are among the few spared so far. The lead author of the paper, Dr. James Gilmour, tells me that coral stress can be caused by a variety of factors—but that also means the right recipe of conditions can help prevent it. The Rowley Shoals are in unpolluted waters on the edge of the continental shelf. Cool, nutrient-rich currents from hundreds of meters below help feed the reef and reduce temperatures. The Rowley Shoals are at a latitude where they escape the worst of both el nino and la nina, Gilmour says. “In these severe el nino years, the Rowley Shoals sits on the edge of that blob of hot water. extreme la nina events also bring hot water to some of Western Australia’s more southern reefs, and the Rowley Shoals sits somewhere north of that.”
While cyclones cause natural coral damage and regrowth at the Rowley Shoals, there was one well-timed cyclone that actually proved fortuitous for reefs here. “Cyclone Stan dropped air temperatures by a couple of degrees in the 2016 bleaching event and this would have dropped water temperatures, too,” Gilmour says. “My concern is that as temperatures continue to rise, if a cyclone is not over the Rowley Shoals, even though it’s on the edges of the worst conditions, it may still be affected.” I’m taking in as much healthy reef as possible, joining Dr. Dave and the snorkelers in the real-life aquarium of the shallow lagoon, encountering a leopard shark, angelfish and clownfish to my sheer delight. As we return to the True North in our Zodiac, graceful spinner dolphins joyfully ride our bow wave. 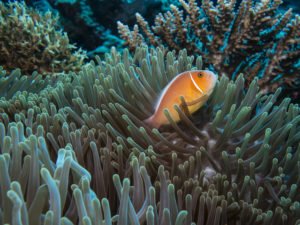 With Catch-and-Release fishing stories involving sailfish, wahoo and tuna being bandied around at dinner, I decide I should give it a try. When a Spanish mackerel hits my lure, my 21-year-old guide, Raff, is right there to help me land it. After obligatory photos, Raff expertly unhooks the fish, setting it free.

For a change of scenery, we visit the sandy speck known as Bedwell Island. The staff have assembled chairs and beach umbrellas, and we arrive to the popping of champagne corks and the proffering of cocktails. Dr. Dave leads a tour to view rare nesting red-tailed tropicbirds and their chicks, and we toast new friends as the sun slides below a deep-blue horizon.
With low passenger numbers, activities on the True North are flexible. Snorkelling tours are deferred for whale watching and scuba diving is delayed by opportunistic swimming with a manta ray. Plans for a drift-snorkel through the narrow “dinghy channel” drainage passage from the lagoon are postponed as conditions are too rough, so we snorkel inside the reef while the wind subsides. Finally, with staff escorting us, 19 guests shoot through the coral passageway, flying over fish, sharks and giant clams, to be spat out into the ocean in exhilarated delight.
Bobbing in the sea, I wait to be scooped up by my dinghy and I remember something captain Gavin had said earlier. He was describing the reef being alive at every level, from the tiniest animals to the largest. “It’s a pinch-me moment,” he said. “The reef here really says something to you.”
On my last evening on a night dive, the reef actually does say something to me. Twenty meters down in the dark, my dive buddy turns to me with wide eyes brightened by torchlight, motioning me to listen. It’s a second before I hear it: a high-pitched haunting melody interspersed with a series of clicks, tingling the hairs on the back of my neck. It’s a male humpback whale, singing his love song for the females and, in my mind at least, for the Rowley Shoals too. 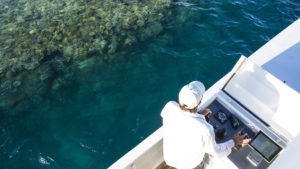 A climate-defying underwater wonderland
One of the things that make the Rowley Shoals so special is the lack of crowds, and the only thing that keeps numbers low is the isolation. Being more than 2,000 kilometres away from Western Australia’s capital city, and 300 kilometres from the tiny town of Broome, should keep it pristine for now.

Cruise
True North cruises to the Rowley Shoals are seasonal, with itineraries planned to avoid the windiest conditions. The five-night “coral atoll cruise” starts and finishes in Broome, with departures on September 5 and 10, 2020. A new 13-night “coast and coral cruise” embarks in Kununurra, visits the Kimberley coastline and the Rowley Shoals, and finishes in Broome; departing august 22, 2020. There are three classes of stateroom on board. On the upper level, the 18-square-meter explorer class features a king-sized bed and twin-basin ensuite, panoramic picture windows and a bar fridge. The river class double is located on the next level down, with a king bed and large windows, while the ocean class twin cabins on the lower deck are 12 square meters and feature two portholes. All cabins have in-room entertainment, a satellite phone and satellite Wi-Fi. 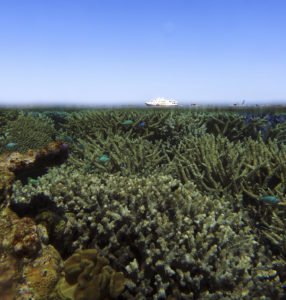 Adventure Cruises on the Australian Coast
Scroll To Top