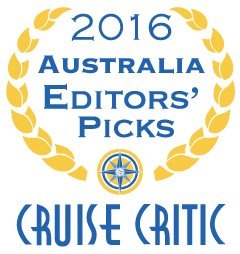 “Australians love to cruise and we’re seeing cruise lines send some of their best ships to our region, reflecting the increase in popularity,” explains Louise Goldsbury, Cruise Critic’s Australia Editor. “With more selection than ever before, we launched our Australian Cruise Critic Editors’ Picks Awards to highlight the top cruise lines and help travellers narrow down their options when planning their next cruise.”

This one-ship line packs a lot of punch. North Star's True North is the only adventure vessel in the southern hemisphere, featuring an on-board helicopter and six expedition boats led by six Australian guides and catering for just 36 passengers. Expertly-run activities, from fishing and diving to heli-picnics, bring out the best of our west and south coasts, the Kimberley, Melanesia, West Papua and PNG.