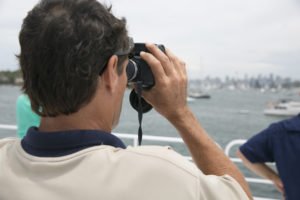 You wouldn't often imagine Gavin Graham being lost for words.

The energetic ship's master is never shy about supplementing his busy agenda with a mostly less than serious running commentary. An often staccato explanation of his immediate plan of attack. A critical or just as likely complimentary evaluation of a crew member’s observed methodology. A thought provoking jibe intended to leverage contentious current affairs or even more likely, a reoccurring lament about the North Melbourne football club’s seemingly ever-present run of bad luck.

However, I do recall an occasion when the unimaginable was chased away.

We were enjoying the delights of a TRUE NORTH Southern Safari.

Reeling-in King George whiting worthy of an otherwise over-relied upon “hose-pipe” descriptive, or more accurately, watching my fish-whispering friend from south of the NSW-Victoria border doing the reeling! I was more-like making-up the numbers when I turned to Gav and mused “What is it about this trip that makes it feel special?”

What followed was an initial period of nonplus although not yet a pause worthy of future recall.

Without over-contemplation Gav cautiously replied “You mean apart from the opportunity to go cage diving with great white sharks.”

“Well that is something that has always been on my bucket list – but yeah, apart from that” I prompted.

Another pause but still something shy of ground-breaking proportions.

“You mean apart from spending a couple of days discovering Kangaroo Island – the place that every overseas visitor to Australia wants to see!”

“True – Kangaroo Island is the southern-most point of the Bermuda Triangle when it comes to international tourism and, going there was another bucket-list item for me – but yeah, apart from KI” was my encouragement.

“Well you would have to mention the food and wine. The opportunity to sample world famous wine in the Barossa, bluefin tuna that melts in your mouth, Australia’s best oysters, you can’t complain about the crabs and, some would say that the King George are about as good as they get.”

“All true” I teased.

And then it came – certainly not deafening and not even golden but unmistakably the longest period of non-utterance that I had ever seen Gav observe. There were a couple of false starts and maybe even some winces but none of the usual rapid fire.

And those from south of the border astutely didn’t disturb.

Gavin smiled and looked from face to face. You could see that at first he sensed a trap but then he busied himself with some other task – forever organizing ‘his’ boat.

Eventually he glanced ashore before slowly turning back to me with the expression that Gav reserves for moments when all becomes apparent “It’s like we are stuck in a time warp” he declared.

The Mexican fish whisperer seized the moment as well “What do you mean by that?”

“The feeling you get, it reminds me of what it used to be like on parts of the West Coast, 10 or maybe even 20 years ago” Gav continued.

“I think you’re onto it” I responded.

Gav gained more confidence “Yeah, I reckon places like Streaky Bay and Smokey Bay have somehow avoided all the hype and it’s noticeable when you go ashore, you kinda sense something, something nice.”

Time to come to the point “Yep, I agree, there is definitely something special about going ashore at those places but how do we describe that feeling when we are telling others about this trip?” I asked.

More silence, well not exactly. My not even remotely looking Mexican companion produced yet another KG that squirmed in both of his fair-sized hands. There were calls of “Cut it out” and other murmurs of envy plus the usual flurry of activity as the impressive fish was transferred to the fish box but even-so, it took quite some time for Gav to return to subject.

“Is it a sense of community?” he eventually offered.

The whole boat was in agreeance.

There was no doubting the physical beauty that is associated with places like Streaky Bay and Smokey Bay.

And they were also remote communities, places that were not necessarily on the ‘tourist highway’ and clearly, the isolation added to the appeal.

And Gav was spot on when he suggested that going ashore felt like being in a time warp – in many other places the charm of living in a remote coastal town was something that belonged to an era past.

But not here, not anywhere west of the Eyre. The entire coast has a special feel to it. Maybe it is a ‘sense of community’- that day we never actually came-up with a handy proposition but as we wandered back to the TRUE NORTH with lunch in the fish box – it was clear indeed that we all felt fortunate to have experienced the Southern Safari and, some of Australia’s hidden gems!

Continue following this blog for more stories, images, tales and adventures from the past 30 years!