LIFE onboard this luxury yacht is so laid back, it’s 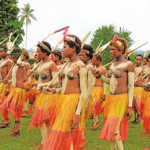 horizontal. There is a no-shoes policy onboard; staterooms have no keys (you can lock them from inside for privacy); there are no safety boxes.

The True North’s bridge is open at all times and you are encouraged to come and say g’day. This is Paradise not yet lost. True North has brought us 70km upstream, to a spot so remote it’s then taken a 45-minute helicopter ride and half an hour on a motorised dugout canoe to get here.

In the relative darkness of a village ‘spirit house’, several young men sit on low stools around a straw crocodile swinging from the rafters. Suddenly I notice the men’s backs. Swollen and angry scarifications in a crocodile’s skin pattern reveal themselves. Similar scars surround their nipples, arms and legs. 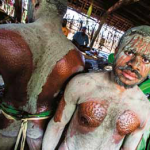 A clay paste applied liberally acts as an antiseptic. Swirls of smoke keep insects away. I have walked into an ancient initiation ritual recently revived in Yetchen, a village on Papua New Guinea’s Sepik River. We move on to Ponam Island. Despite its remoteness, it has its own school. Last year, True North promised to reward the school’s eight top-performing students with a helicopter ride.

Ponam Island school records reveal student grades have climbed by 40% since then. Today we are here to fulfil that promise. It is hard not to smile at the radiant faces when they return from their adventure in the sky. It’s not hard to see why their wonder is so great — there are no roads on these islands and therefore no cars. A helicopter is a big deal. 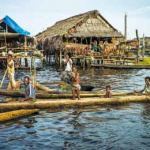 There’s no TV either. Islanders live in a virtual cashless society, getting by with subsistence farming and bartering for most of their needs. Kylie, a lanky teenager from Luf Island, shyly asks us, “What attracts you to PNG?” It is a hard question to answer without the barefoot millionaires sounding patronising or banal.

The fine balance between voyeurism — even if of the cultural kind — and a genuine desire to experience other cultures is addressed by Captain Greg Dunn: “We come to learn about your culture,” he says and the group nods but much is left unsaid. “Why are you so interested in making fire with sticks when you have lighters?” puzzled locals often ask.

Sailing the eerie waters of a volcano’s ancient hollowed- out caldera, buying giant prawns from local fishermen whose brand of Christianity forbids them their consumption, and diving among WWII shipwrecks are memories that blend in together with other extraordinary marine and aerial experiences — diving, snorkelling, fishing and helicopter sorties take place around the clock.

This is a sophisticated, understated Australian enterprise with a superefficient, all-Australian crew delivering service with a contagious sense of humour. And the food is to die for, thanks to chef Andy Tonge.

The writer travelled courtesy of True North and Best Western Plus, Cairns.