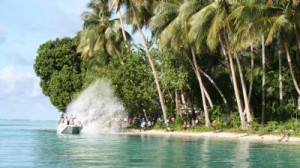 Exploration has always been a hallmark of North Star Cruises. Owner Craig Howson pioneered the discovery of the Kimberley coast 25 years ago, and that vision still propels the TRUE NORTH, her guests and crew into new and exciting locations all over Australia and the Indo-Pacific.

In November 2011 we recently completed our latest and boldest exploration cruise, a 21-day complete circumnavigation of the Bismarck Sea along the northern coast of Papua New Guinea. The region contains a tantalising mix of isolated coral atolls, soaring jungle-clad islands with black sand beaches and active volcanoes, and of course the mighty Sepik River with its myriad lakes, lagoons and villages. The Bismarck had been on the North Star Cruises is giving away 25 heli-packages valued at $1000 to the next 25 people  “wish-list” since the inception of our PNG cruises, and senior Captain Brad Benbow applied himself to the task of developing an itinerary that would take in the very best destinations across the region.

The voyage completely surpassed all our expectations, and the Bismarck itinerary that evolves out of this first discovery mission is set is set to become one of our most exciting cruises, ranking alongside the Kimberley and West Papua in terms of site diversity, culture, and breathtaking landscapes. It really will be a Bismarck Bonanza.

The North Star Cruises is giving away 25 heli-packages valued at $1000 to the next 25 people  helicopter has always provided guests with a fantastic aerial viewpoint, and senior pilot Rob Colbert was amazed by the flying opportunities afforded during the Bismark exploratory cruise. The vast reef complexes around Rambutyo Island and Ninigo atoll had guests raving about the turquoise waters, whale sharks and manta rays, while the flights around the active volcano at Manam Island stunned everyone with views of incandescent lava sprays high into the air. WW II history buffs were not forgotten, with a stirring visit to the Cape Wom memorial near Wewak, where Japanese forces in PNG surrendered in 1945. Another highlight was the exploration of the Sepik river area, with flights into the upper Sepik catchment, and a visit to the spirit house at Yentchan village to observe male initiates taking part in the gruelling crocodile body-scarring ritual. The helicopter returned to the ship so laden with carvings and custom masks that we needed extra deck crew to complete the unloading!

Down at sea-level, divers and snorkelers were treated to some of the best underwater scenery on the planet, with the myriad reefs in the Hermit and Ninigo atoll complexes providing countless coral playgrounds for exploration. Rambutyo and Ponam Islands off Manus also had very good coral cover, and after participating in this cruise, my overwhelming feeling is that we could have snorkelled and dived many of these reef locations for a week or more without tapping all of their potential. It is very exciting to think of all the future underwater exploration still to be done on and  during subsequent cruises to the Bismarck Sea region. The fisho’s were of course very busy as well, keeping us well stocked with Mackeral, Wahoo, and Yellowfin sashimi over the whole trip.

Meeting the Melanesian people of PNG has always been a highlight of our Adventures in Paradise cruise through the Solomon Sea, and I’m pleased to report that our new Bismarck cruise continued to provide guests with wonderful opportunities to interact with local peoples throughout these very remote areas. The split-log drumming ensemble at Rambutyo Island was indeed a force of nature, shaking the ground with their powerful rhythms and accompanied by a great company of festooned warriors and brightly dressed maidens, and many agreed this would have to rank as one of the best sing-sing’s we have ever seen in PNG. It didn’t stop there however, as the river people of the Sepik also put on fantastic performances, with the dance of the giant crocodile puppets (which needed 4 men to animate them) a real crowd pleaser as well.

Travelling nearly 130km up the Sepik River in the True North was another fantastic new experience for guests and crew alike! We see some pretty wild rivers in the Kimberley, but the Sepik was on another level again – at Angoram, over one hundred kilometres from the sea, the Sepik was still 500m wide, 35m deep, and flowing at about 4 knots - truly impressive! At Kambaramba, we detoured off the main river in the tenders, and entered a maze of narrow waterways that suddenly opened into a vast inland lake. Gradually, a whole stilt village materialised from the haze on the far side, and a massive flotilla of canoes came out to greet us. We were surrounded and overwhelmed by the flowers and warm greetings that we received from these lake people that spend their whole lives on the waterways of this massive river system. Babies, grandmothers, dogs, chickens, pigs, churches, all suspended a few feet above the surface of the lake in orderly rows of pole houses. Altogether we spent 3 days in the Sepik, and everyone agreed it was one of the best aspects of the cruise, providing a valuable insight into the lives of the freshwater people that live a very different existence to the saltwater people on the offshore islands.

At the conclusion of the complete 21 day exploration, I met with Craig Howson, Captain Brad, and heli pilot Rob Colbert, and we reviewed the voyage with the objective of condensing all the best aspects of the cruise into a new 11 day itinerary for 2012 and beyond. We were very happy with the final result, as it covers the most spectacular dive sights on the northern islands and reefs, the best volcanoes and heli flights, and of course 2 full days up the Sepik River. The Bismark Bonanza will add new breadth to the cruise options offered by the company and we are sure it will prove very popular with guests over the coming years. We are all looking forward to continuing our exploration of this fascinating region of Papua New Guinea.