West Papua is the last frontier of the Indo-Pacific and deep in the heart of this flourishing equatorial wilderness is a biodiversity hotspot – Cenderawasih Bay. See the biggest fish in the world interacting with local fishermen and then snorkel with these gentle leviathans for hours enjoying countless breath-taking encounters.

Return charter flights ex Darwin ARE INCLUDED in the cruise tariff. This itinerary is provided as example only – prevailing conditions, local arrangements and indeed, what we discover on the day, may cause variation. 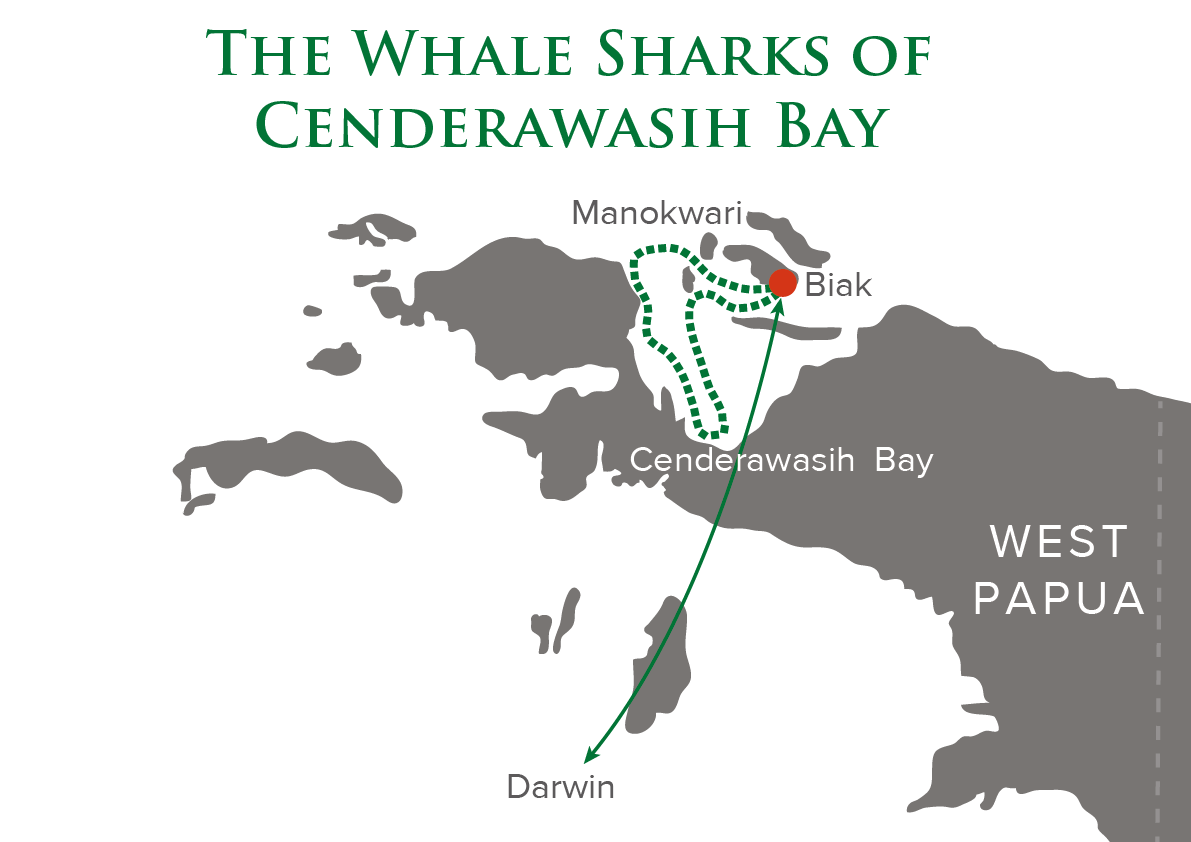 Your adventure begins amidst the tropical charm of Darwin. One of our crew members will escort you aboard True North Adventure Cruises' chartered aircraft for your short flight to Biak.

Biak is also where we will welcome you aboard the magnificent TRUE NORTH.

Enjoy a welcome aboard cocktail as we set sail on a journey through the very heart of the ‘Coral Triangle’ – the world’s most bio-diverse marine region.

West Papua’s coastal areas encompass more than 275,000km2 of land and sea including the Cenderawasih Bay Marine Park – the largest marine park in Indonesia and, setting for one of the most unique animal encounters on the planet! 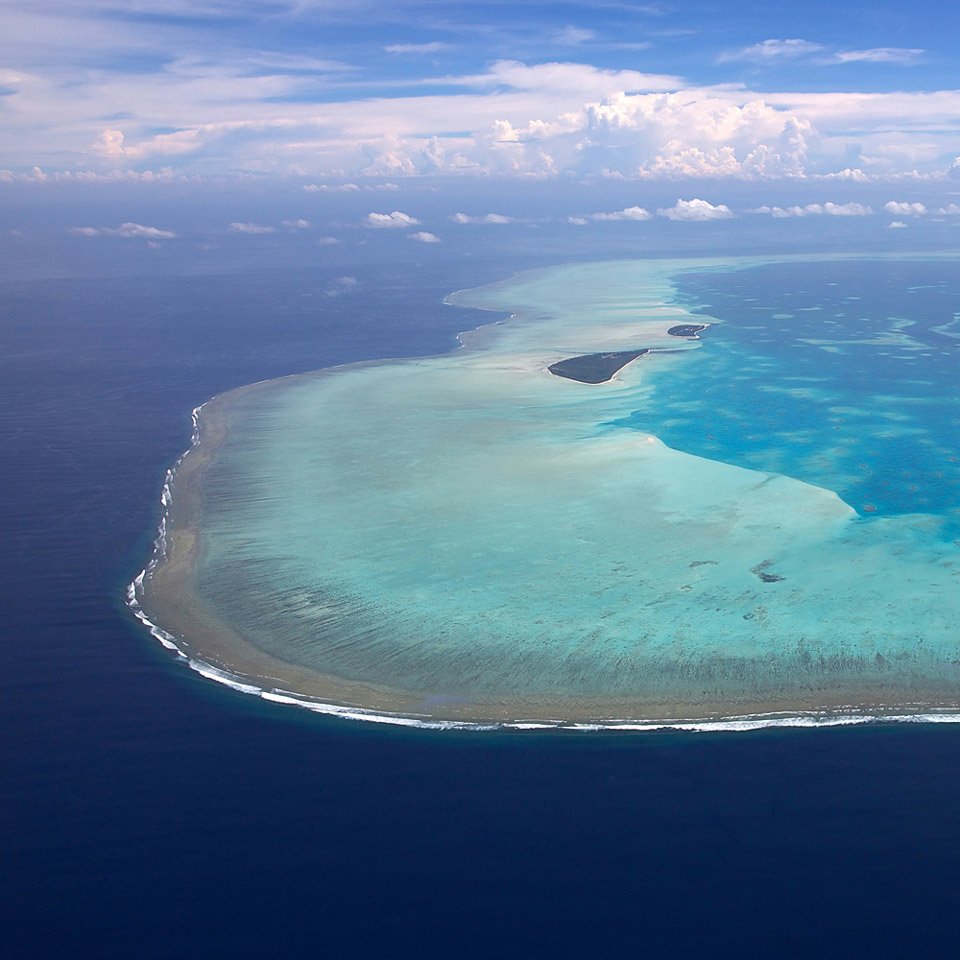 Mapia Atoll is a very remote and exquisite coral atoll seldom visited by tourists. Located north of the equator and lying basically in the middle of nowhere, the atoll presents classic opportunity to indulge in nature’s tropical ocean splendour. Vertical walls rise several thousand feet from the ocean floor and come alive with brilliant soft corals, gorgonians, sponges, myriad of tropical fish and a dense population of green and hawksbill turtles. The area also has an enviable reputation for light game fishing! Snorkel, dive and fish to your hearts content! 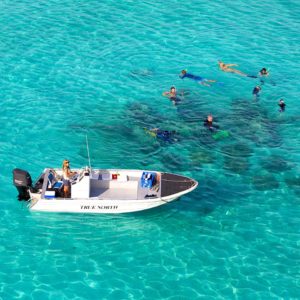 Today we visit Pulau Num and Pulau Swande. These highly picturesque islands offer another day of spectacular snorkelling, diving, beach-combing and fishing. Take an adventure boat ride through the bays of Pulau Num where locals live in huts stilted over the water and soak-up the stunning tropical scenery at Palau Swande. After lunch our guides will give an informative presentation on what makes Cenderawasih Bay so biologically and culturally unique. At the end of the day stroll along your very own beach, indulge in a refreshing beverage and watch the sun set in paradise! 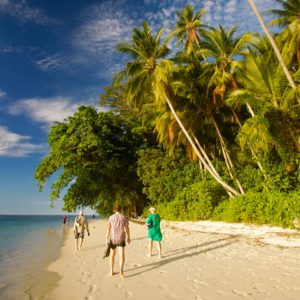 The Auri Islands offer the most beautiful clear-water snorkelling and diving in Cenderawasih Bay, as well as some of the most beautiful (and uninhabited!) white sand beaches in West Papua. Revel in breathtaking snorkelling and diving on the sheer walls of Tridacna Atoll (named for the plethora of giant clams on the reef) and again at Wild Fish Reef. After lunch, we’ll be treated to an informative presentation on what to expect when we encounter tomorrow’s giants and then everyone will be given the opportunity to enjoy a mid-afternoon heli ride over Auri’s spectacular Karst islands. Later in the day, snorkel over a trio of American WWII fighter jets mysteriously sunk in formation in only a few metres of water. End the day with beach drinks on our very own pristine sand spit as the setting sun turns the Cenderawasih sky to fire. 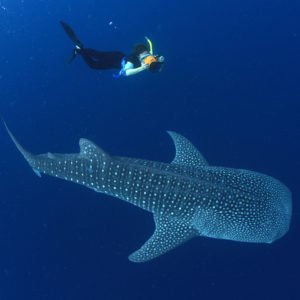 The whale shark (Rhincodon typus) is the biggest fish in the sea! They feed predominately on plankton (although in Cenderawasih they’ve taken a liking to small baitfish!) and can grow to more than 12 metres in length. There are several places in the world where snorkelers can seek out a close encounter with these gentle giants – however we are pretty sure that nothing compares to a whale shark encounter in Cenderawasih Bay!

Most encounters with whale sharks are fleeting – although they mostly swim slowly, mouths open and gulping buckets of microscopic plankton – they don’t have any trouble cruising past even the most determined snorkeler. But not in Cenderawasih Bay – here whale sharks linger close to the surface for extended periods and the reason for this unusual behaviour is not difficult to appreciate – they have long become accustomed to taking advantage of small fish that spill from the nets of local fishermen. This ‘learnt behaviour’ provides even the most inexperienced snorkeler with a unique opportunity to truly interact with these mammoth fish.

Join the crew for many ‘once in a lifetime’ experiences!

Two days will also afford ample opportunity to explore further afield. The Cenderawasih Marine Park features over 15,000km2 of relatively undisturbed marine and coastal habitat and the extensive coral reefs rank amongst the finest in the world. Cenderawasih is renowned for its diversity of coral reef fish species. Over 1040 species inhabit the park including numerous species of colourful butterfly fish, angelfish, damselfish, parrotfish, rabbitfish and anemone fish. Renowned Australian ichthyologist Dr. Gerald Allen has called Cenderawasih the “Galapagos of the East” in reference to the numerous endemic species of fish and coral and also because local evolution seems to be heading very much on its own trajectory! Species of mollusc are also particularly diverse and four species of turtle are often seen – the hawksbill turtle (Eretmochelys Imbricata), the green turtle (Chelonia mydas), the Pacific ridley turtle (Lepidochelys olivacea), and the leatherback turtle (Dermochelys corlacea). Dugong (Dugong dugon), coconut crab (Birgus latro), dolphin and various shark species are often frequently sighted inhabitants.

Roon Island is known for its excellent and varied dive sites, beautiful shallow snorkelling reefs, friendly villagers and stunning aerial scenery. Begin the day with either an energising snorkel on the lovely reefs of the Numamuran Strait or a dive at the southern end of Roon – where a Zero fighter lies on a hard coral slope in just 12 metres of water and green turtle, barracuda and surgeonfish are known to swim alongside equally curios divers. After morning tea have another go at snorkelling or diving on the unique underwater geological formations. In the afternoon join a walk around the village at Yende and discover the local culture – the village church contains a bible that dates back to 1898!

Then all too soon we’ll steam east into the Auri Islands for one last reflective moment with your fellow-adventurers – celebrate an adventure-packed Cenderawasih sojourn with farewell sunset drinks on the beach! 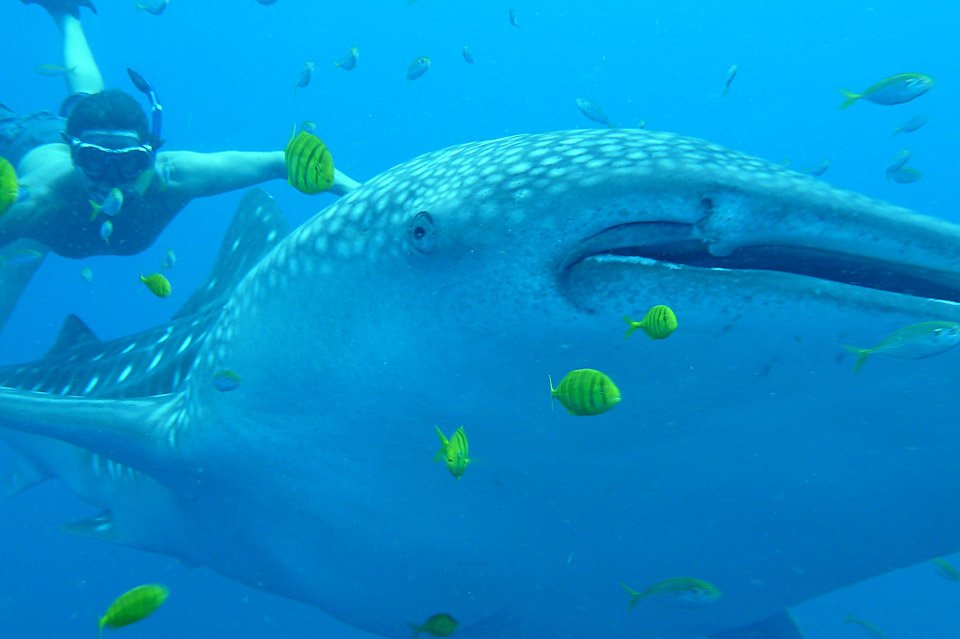 Enjoy breakfast on-board before a private car transfer to Biak Airport and your chartered flight back to Darwin.

Whoa what an experience, highlights every day whale sharks, false killer whales, great snorkeling, interesting village. Jack and I had many new & great experiences. Thanks to the world’s best crew. Barb & Jack (the world’s luckiest people)

Another trip in paradise, who would know the joy of swimming with such gentle giants, thank you each and every one of you. Bless you all!!

Tracking Gentle Giants Rhincodon typus can grow up to 18 metres in length and is the world’s largest fish! Despite this, little is known about these gentle giants of the sea. They may not venture near the surface for months or even years on end – only…

It’s now been just over two years since we successfully deployed the world’s first finmount satellite tags on whale sharks in Cendrawasih Bay – and with one of these original tags still transmitting, it seems a perfect time to reflect on what we’ve learned of these magnificent animals since launching Conservation International’s  tagging program with the generous support of the True North and its wonderful guests!